What is domain ontology?

Ontologies find use in the Semantic Web, Artificial Intelligence, Systems Engineering, Biomedical Informatics, Software Engineering, Enterprise Bookmarking, Library Science, and Information Architecture in a type of representation of knowledge about the domain or a part of the domain.

There are 4 groups of ontologies: static, dynamic, social and intentional.

In any domain, the ontology is the core system of representing information for that domain. Without the existence of the ontology, or the conceptualisations which form the basis of knowledge, a vocabulary of knowledge representation cannot exist. A domain specific ontological study gives clarification to knowledge structure.

Creating a domain ontology is also key to defining and using a framework of enterprise architecture. Therefore, the first stage of creating an effective system for representation of knowledge and vocabulary is an effective ontological study of the domain. A weak analysis will result in knowledge bases that are incoherent.

For building a language of knowledge representation based on analysis, an association of terms along with ontological concepts and relations, and creation of a syntax for knowledge encoding pertaining to the concepts and relations is necessary. This language of knowledge representation can be shared with those having similar requirements for representing knowledge in that domain, hence negating the requirement for repeating the process of knowledge analysis. Ontology sharing can hence create the basis for domain specific information-representing languages. When compared with the earlier generation of such languages (say, KL-1), these languages have rich content besides having a many terms embodying complex constituent of the domain. 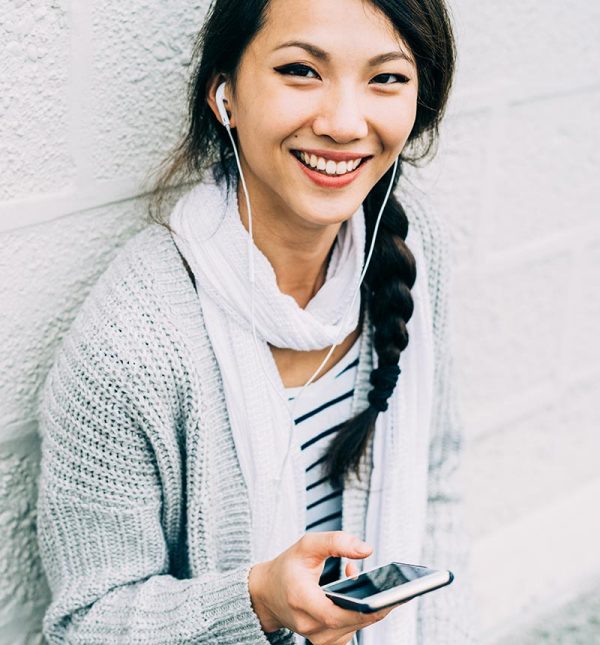 Why create domain specific ontologies ? – “Context is the King”

Domain specific ontologies are created for the following purposes:

Following are the challenges in building domain specific ontologies:

As mentioned earlier, an ontology can be defined as an explicit, formal specification relating to a shared conceptualization based on a high expressiveness of semantics needed for higher complexity. Representations of Ontology permit modelling of knowledge semantically, and are thus widely utilised as artificial intelligence application knowledge base for knowledge-based systems. Applying an ontology as a knowledge graph allows validating semantic relations and deriving conclusions from available facts for reasoning.

Ontologies, essentially, are not different from knowledge graphs, though they are occasionally classified erroneously in similar level of database schemas. Ontologies, in fact, comprise of not only properties and classes, but also have instances such as the ontology population. Putting it differently, size sometimes is mentioned as a key feature of knowledge graphs (KGs), hence a KG can be thought of as large ontology. But then, it has been pointed out that KGs are, in a way, superior to an ontology and possess additional characteristics. Hence, the difference between KGs and ontologies can be seen either in a quantitative manner as a large ontology, or of having extended needs with a built-in tool which permits derivation of new knowledge. The latter interpretation implies that a KG is a knowledge-based system which has a reasoning engine and a knowledge base. Looking at current automatically generated KGs, we could identify the next important feature: collecting, extracting, and integrating inputs from external sources stretches an essentially knowledge-based system with the idea of system integration. 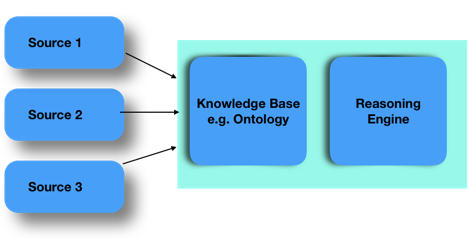 Machine Learning is a discipline that can contribute in a major way in improving ontology creation and learning. A classical explanation of machine learning (ML) is as follows: an experience E teaches the system in accordance with a performance indicator P if it enhances its performance measured by P after going through the experience E. ML, traditionally, is based on developing inductive pattern extracting methods from the provided data. It goes beyond statistical research for model building and works with much more complex algorithms to obtain precise and larger models for the data, which may not be comprehensible to humans any more. ML finds wide use in areas involving prediction, adaptation, and pattern recognition and extraction. 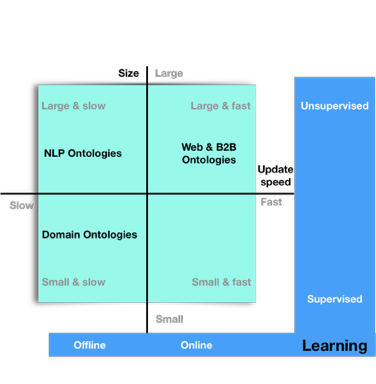 Fig 2. The classification method in the figure is based on update speed and ontology size.
Fig 2: Ontology & ML type

Table 1 presents the comparison of the kinds of ML algorithms with types of ontologies. It is seen that each kind of ontology can be learned by a specific ML technique. 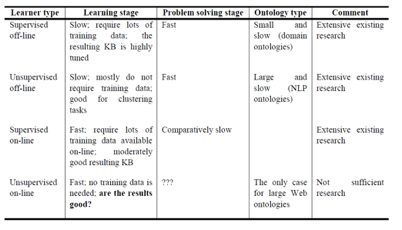 In the next post we will discuss in details about how different ML algorithms can be used to create domain ontology for specific use cases and business challenges.

To foster superior and automated customer interactions, get in touch with us at https://www.bankbuddy.ai/

Invoice to pay for SME customers

The Canny Co partners with BankBuddy for its CannyPay solution

Why BankBuddy is the most secure WhatsApp banking platform